Owner and Founder of FocusBella, Rich Bella aka Mr. Focus, is the Team Manager.  From your consultation to the delivery of your finished product, Rich oversees the process to ensure that FocusBella always delivers the highest quality, within the time-frame requested.

Rich Bella is an American Cinematographer with a passion for capturing the moments that create great films.  Rich has grown rapidly within the industry over the past 10 years, having shot as a cinematographer, over 10 short films and 4 feature length films.  Additionally, he has to his credit shooting commercially for international name brands and independent musical artist.
Beginning his journey in his mid 30’s, Rich brings his worldly experiences from living in Europe and Asia as a young person to create texture which deepens the projects he works on.  A best selling co-author in the motivational world, an award winning poet and a collegiate athlete he is determined and strives for excellence in all that he does.  Rich is a husband and a father of five children ranging in ages from 2 to 22.  They are his most important life lessons and the reason he is driven toward success as “Life is the biggest experience that we creatively draw from.”
Rich Bella’s directorial inspirations are Kubrick, Scorsese, César Charlone, Gaspar Noé and others on an ever-expanding list .
His favorite cinematography film is “The Grandmaster” in how DP Philippe Le Sourd executes each shot as individual frames of beauty.
Rich Bella’s most recent work “Like Blood” is one of his most favorite films that he has worked on as each scene was shot with intense passion from the direction, the lens, and the action. 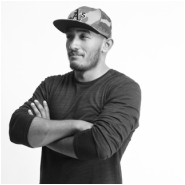 Lewis is an amazing editor.  He is not afraid to take on any challenge from long form editing to quick cuts.  He has a seamless style that threads together the story where it feels organic and simple.  On his 2nd Job with FocusBella he hit a home run on a DreamWorks project.

Lewis was the Editor for DreamWorksTV cover Brianna Leah did for Tori Kelly, "I was Made For Loving You."  Lewis edited ""Out of Bounds" a short film FocusBella shot. 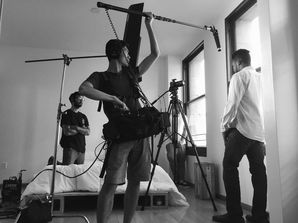 Anthony Newen has held numerous positions on video and movie shoots and has found his place as a Sound Engineer. Anthony has worked with brands like Toyota, PricewaterhouseCoopers, and American Heart Association, online creators like Lilly Singh and King Bach, and has learned from Lee Orloff (Terminator 2, Pirates of the Carribean) and Mark Steinbeck (The X-Files). He's grown quickly within the industry and continues to learn to capture and record the best sound possible for any project he work on.

Tony has worked the most with FocusBella from corporate gigs to narrative films.  He is the main sound engineer for the upcoming film, "Like Blood" with Tallie Brinson, Sheldon A. Smith, and CJ Wallace, directed by Zaahir Abdullah.